The struggles of gods and mortals...

Another little side project to satisfy my distractions.  A few months back, I picked up a copy of Osprey's "Of Gods and Mortals" ruleset.  It is a nice read, and I decided to make up a small force for a couple pantheons.

The first pantheon I am working on is ancient Egypt.  It is a small force, consisting of about 20 figures, here is the armylist:


For my first entry:

Horus, the patron deity of ancient Egypt, calls forth his most loyal servants.  The false gods of far away nations gather their forces, intent on despoiling the fertile kingdom.  To defend the Nile delta, he summons first his loyal servants from their long rest in the underworld.  Their mortal remains are withered and decayed, but their spirits are strong and their loyalty unwavering!

The first entry for this army is a unit of 4 mummies (skeletal guards from Dark Fable miniatures) and a Great Mummy (Northstar miniatures). 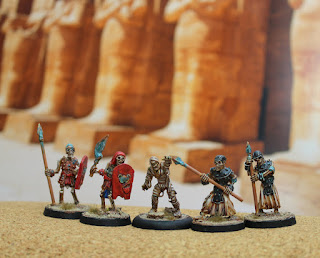 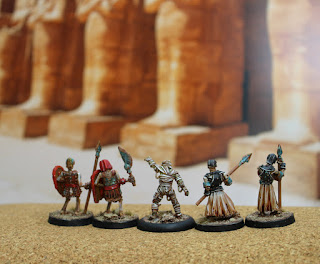 I have been waiting for an excuse to paint some of the Dark Fable figures I got a while back from their indiegogo campaign.  They were really fun to paint, especially the verdigris on the bronze.

Next up will be the Egyptian Elite troops.