A recent Kickstarter campaign saw the production of six lovely sci-fi civilians.  I decided to paint up one of them, as I just got them last week and was quite excited to see some of them painted.  I thought I would add a little bit of my own background to the interpretation of the character.  I give you:

Whether you need ammunition or medication, stimpacks or recaff, if there is anyone in the galaxy who can get it for you, Pash is your man.  A merchant without equal, he is loyal only to money.  If you can offer him enough, there is very little he cannot accomplish.  He is characterized by his trademark white suit which, despite his willingness to go anywhere to make a deal, always seems to remain clean.  Mostly.  He always carries his most popular items on his person, never one to pass up a quick buck.  He also takes his respirator constantly, ever since the incident with the airlock on the star cruiser "Nemesis".  So whatever you seek, feel free to ask Pash.  Just be quick about it, or he will find another buyer! 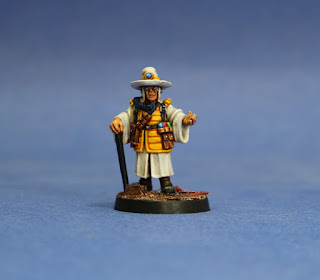 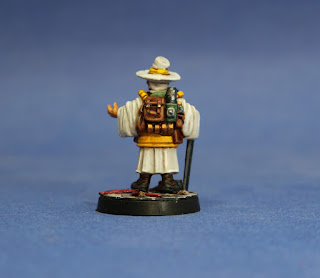 Another great figure to paint, the details came out quite nicely.  I had a fun time making the base... a simple construct using some plasticard, wire, sand, drywall tape, and a plastic sprue.  A couple closeups of the base: 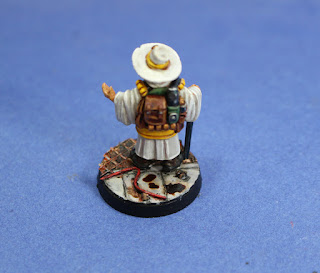 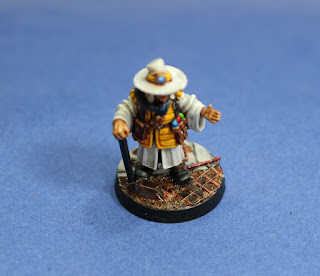 One day I hope to use Pash in some sort of narrative game.  I might even get pictures of him!