I suppose I should introduce you a bit more to my Mordheim warband.  Here is the introductory prose I wrote up for them:

Lord Sneekz fumbled at the chain fastening his cloak, he could feel the yellow beady eyes of the rats on him. Clearing the phlegm from his throat, he addressed the horde,

Who will brave-venture to sneak-steal into the cursed city to bring-retrieve the mighty treasures back to our glorious clan?"

Silence descended on the audience as the rats looked sheepishly around them, waiting for one to gain the courage to volunteer. A panicked Skaven released his fear musk, the pungent aroma putting the whole audience on edge.

Rolling his eyes, Sneekz nodded to his Black guard. Whips cracked and rats shrieked as "volunteers" were chosen from the group.

"Most good-great! Our mighty warrior-slave rats will bring much success-victory to clan Kraven. The city-ruin of Mordheim will herald our ascension!"

Clan Kraven is a subservient clan to clan Eshin, sending out its assassins and scouts to do the great Eshin's bidding.  Lord Sneekz, twice as paranoid and thrice as cowardly as your typical skaven (in close combat, at least) has sent his minions to Mordheim to bring him treasure and glory.  My starting warband is as follows:


Clan Kraven's first battle was against the Orcs of Knurr.  Their warband is as follows:

"Lord Sneekz has sent-given a message, there are rumour-tales of wyrdstone in the northeast quarter!"  Stranglifink twitched his nose nervously as he shared the orders with Gutterclaw.  The assassin said very little, but was quick to lash out if he was displeased.  With a commanding shriek, the band of ratmen fell in as they sidled along alleys and ruins.  As they approached a ruined watchpost, Greytail (the Fumbling) stopped.

"The wyrdstone, it's here-there!" The wizened rat pointed a bony finger towards several ruined buildings.  A faint green glow emanated from the shadows, betraying the presence of the magic stone.

"Not-its-not the only thing-enemy here.  Green-things!" Stabbak the Night Runner squeaked as he pointed excitedly towards a hulking band of orcs.  The craven reek of fear musk pierced the stale city air...

The clamour of Dalruk's knuckles rapping on iron was silenced as a deafening shriek filled the air.  The murine call was not one of despair, but a powerful magic, summoning powers to his bidding.

Start of battle.  Scenario is Wyrdstone hunt with three wyrdstone shards being placed among the ruins.  Greytail casts "Children of the Horned Rat" and successfully summons three giant rats to join there warband for the duration of the battle.  The starting deployment: 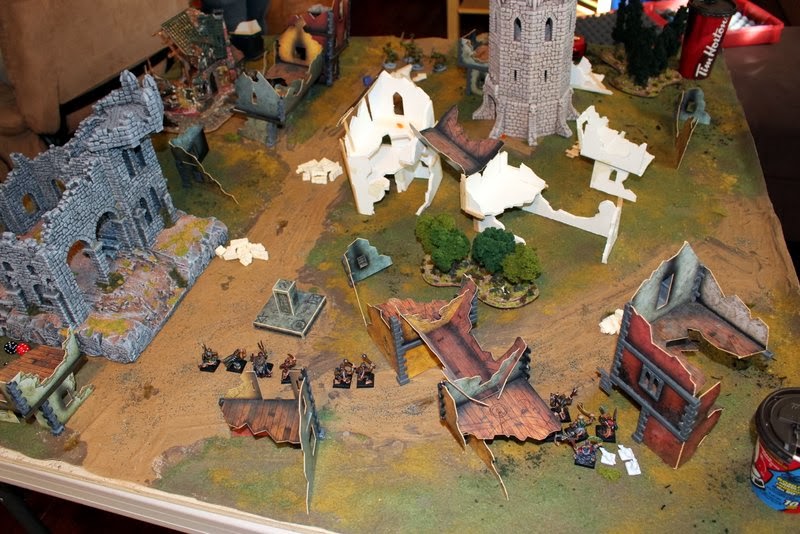 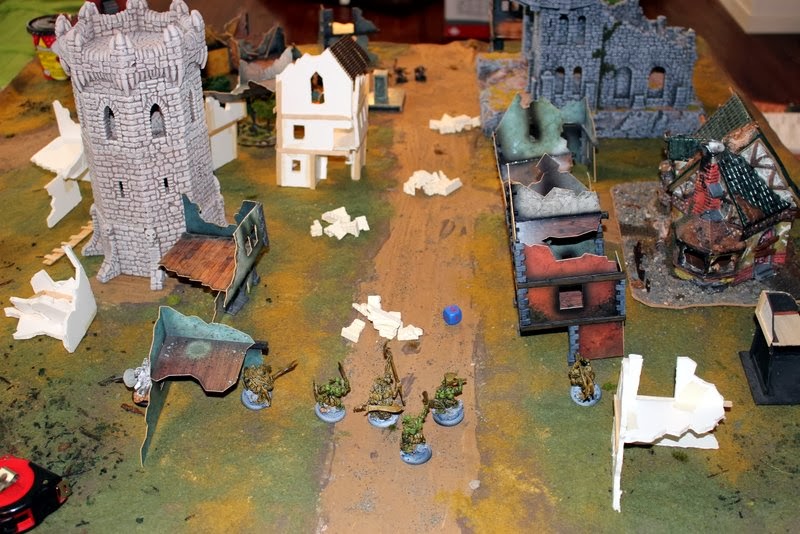 With a series of whistles and clicks, Gutterklaw positioned his rats.  Having seen the greenskins first, the rats seized the initiative to race towards the precious wyrdstone.  Their natural speed allowed them to cover a great amount of ground in little time.  As they scrambled towards the buildings, the orcs took up positions near the rubble at their end of the street.  Redluck Gnarlmane, one of the orc Big'uns circled to the right were a ruined building housed a valuable shard of magical stone. 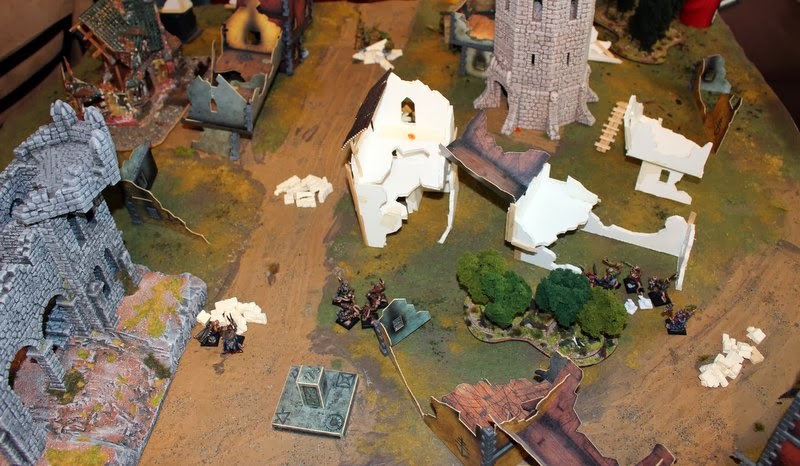 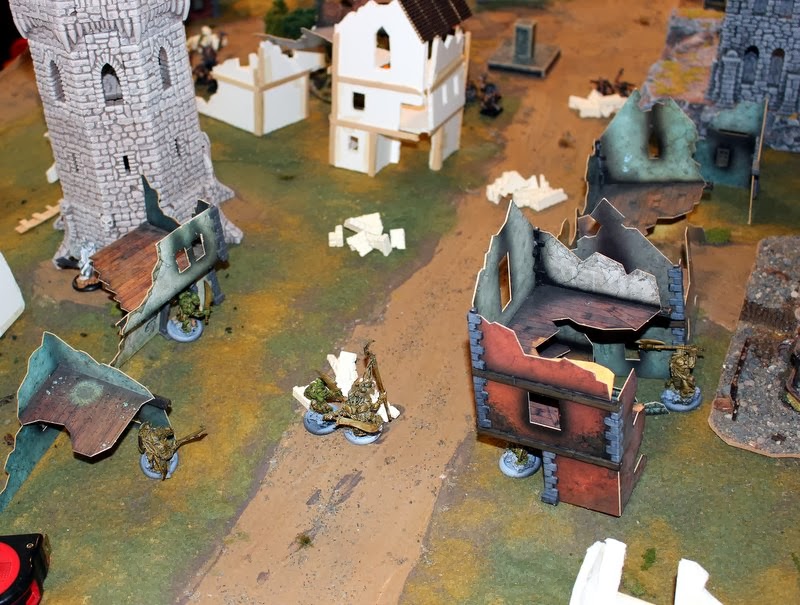 Drasht Fellmark, an orc Big'un tried a test volley aimed at the cloaked skaven assassin, but at such a long range, the bolt stuck to a piece of charred lumber in the street, harming nobody.  In turn, the skaven scrambled closer, those armed with slings clamoring to find a vantage point from which they might rain death on the intimidating greenskins from afar.  The rats on the right flank raced towards the stone tower, eager to grab the unprotected piece of wyrdstone.

Hoping to avoid being pinned by the crossbow fire, Gutterklaw urged the closest rats to break cover and head towards the decrepit building where Redluck was lurking.  He would not take the shard uncontested!  Seeing the rats coming, Redluck muttered to himself, "Iz me lukky day!  Lookit dem rattiez comin straight to my big choppa!"  Patting his two handed axe, he hauled himself up onto the building, waiting for a rat to come close enough...

Meanwhile, on the main street, Karrok's eyes began to glow green.  Focusing his gaze on the closed rat, a lowly verminkin armed with a club, a powerful surge of green energy shot from his forehead (successful cast of zZap!).  The green energy engulfed the rat who let out a gargled shriek as he slunk to the ground, blood oozing from every orfice as his legs twitched slowyly (out of action).  The orcs had struck first blood! 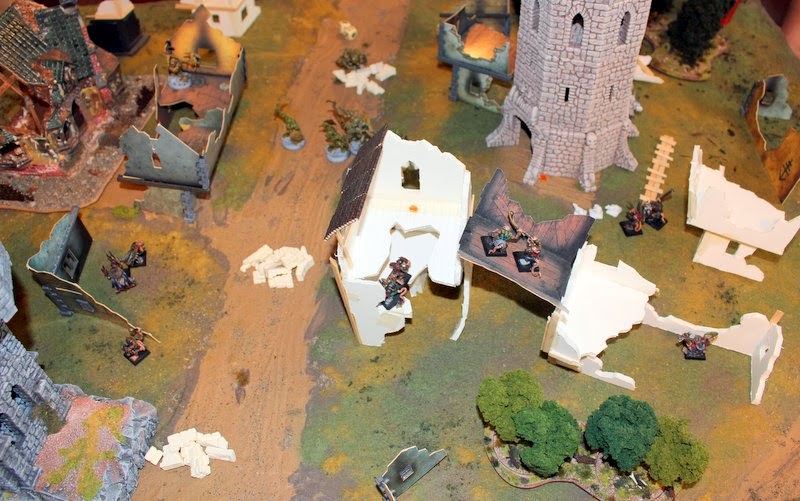 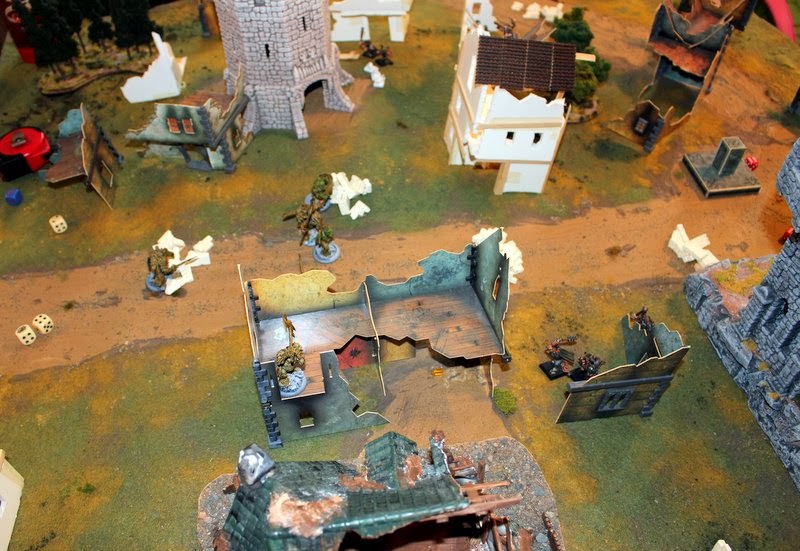 As the orcs celebrated raucously,  Skratch the black Skaven the opportunity to grab a shard of wyrdstone, while urging the group of giant rats to charge the clustered orcs.  As the rats closed in, scratching and biting, no orcs were felled.  In the counter attack, one rat was knocked down but the others managed to dodge the crushing blows that were sent against them.

On the other flank, Skritch, the other black Skaven, rushed into the decrepit house and seized the final piece of wyrdstone as Gutterklaw and a verminkin secured the path of retreat.  As he grabbed the glowing stone, he was startled by a warcry from above.

"WAAAGHH!" Redluk hurled himself in a diving charge towards Skritch, his greataxe poised for a victorious, crushing blow.  The orcs small red eyes were filled with fulfillment as he envisioned the rat's head on his trophy rack.  Whether it was luck, or a lifetime of dodging daggers in subterran caverns, or perhaps the slowness big brutes' axe, may never be known.  What was known, was Skritch clenched his flail and landed a timely blow on the orc's head, sending him to the ground stunned before his axe could be swung.

In the street, Karrok moved up to try and zap another rat.  The smelled of burned fur still lingered in the cluttered laneway.  His second attempt was less successful and ended only with the orc getting a headache.

Meanwhile, the skaven in the buildings slung stone after stone at the orcs, but not one managed to find a mark. 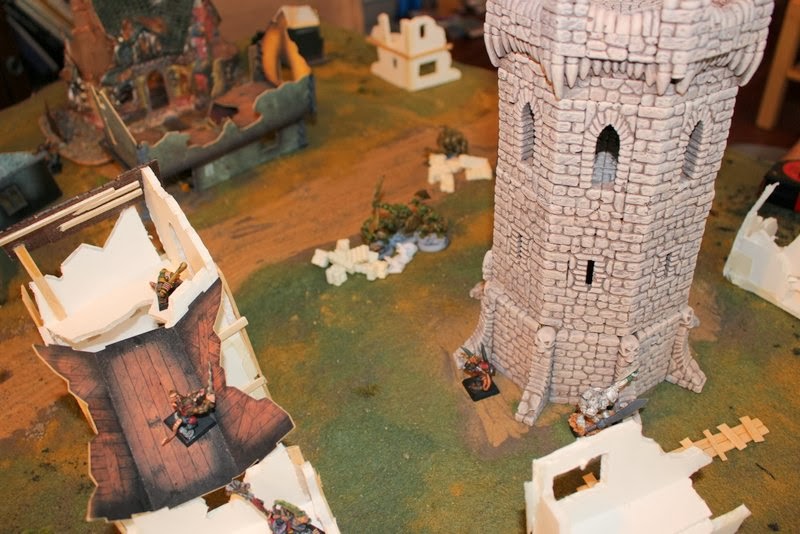 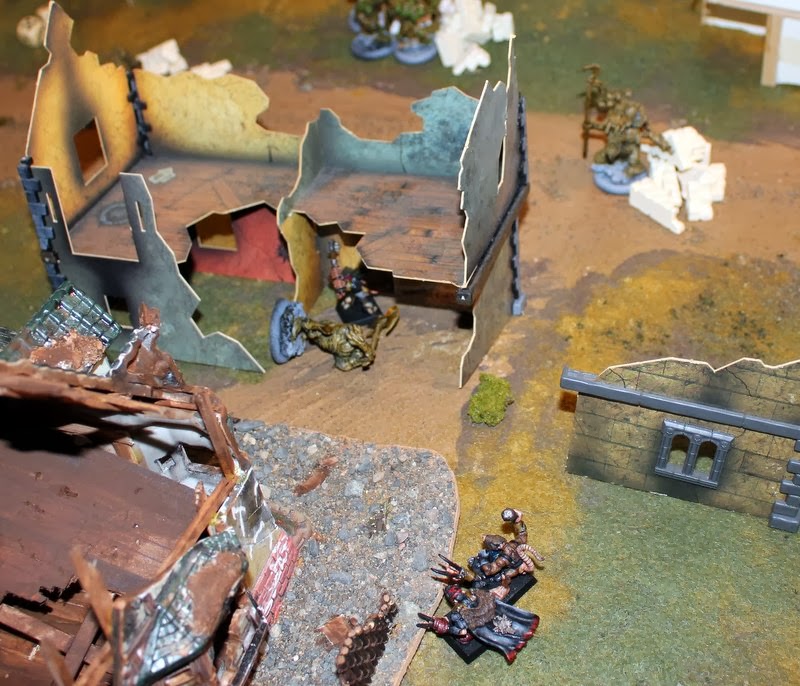 With all of the wyrdstone shards secure, the skaven made on final push.  Gutterklaw and a verminkin rushed the orc shaman in the street, felling him under their combined blows while Skritch finished off the stunned Redluk.  On the far flank, Skratch, seeing that Dalruk had circled the tower to try and catch him off guard charged in to assist the giant rats.  As he held off two of the big beasts, the smaller vermin were able to overwhelm and subdue one of the great green brutes. 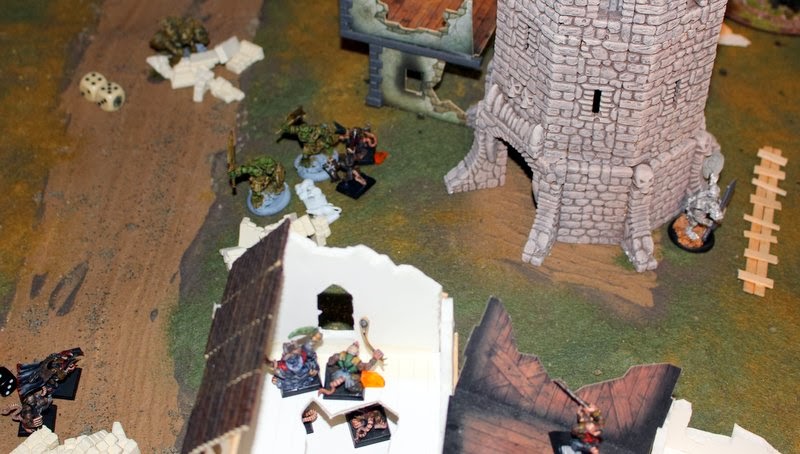 Seeing his boyz fall to such weak creatures made Dalruk's blood boil.  The blood pressure rose and his head felt like it would explode.  As he opened his mouth to roar his defiance, he began to take in the sheer numbers of the force arrayed against him.

With that, the orcs disengaged, leaving the skaven to their spoils.

Result: Victory to the Skaven!  The orcs were forced to retreat when they failed their break test.

Lessons learned: Skaven are fast.  They definitely have an advantage in search-and-find scenarios when most of them can move 50% faster than most other races.  It was a very fun game though, and that zZap spell of the orcs is pretty scary.  Luckily it was only successful once.