So, after some suggestions and some thinking, I decided that a recessed gutter would look better than a raised curb for this table.  It would also be more practical as the curb could interfere with some terrain placement.

Additionally, I replaced several areas of blocks with some foamcore I had laying around.  I am planning to cover some large swathes of the cobblestone in snow drifts, so there is no reason to cover up the completely good tiles I worked so hard to cast.  This has the added bonus of leaving me more leftover tiles to make some board expansions in the indefinite future.

Any other suggestions?  I think I will start gluing down the tiles this week, time (and glue permitting)! 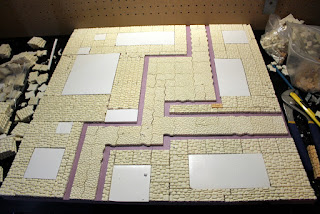 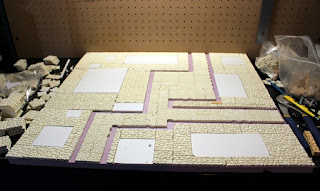 Also, I forgot to add, the snow will be made using regular PVA glue and fine play sand.  It will then be painted appropriately along with the rest of the table.  Should work out much cheaper than purchasing enough snow flock to cover a table, considering I already have the sand.